Here at Bath we decided to collate some of the stuff we have been reading into monthly(ish) short reviews. In part this is to stimulate discussion- and at other times to demonstrate that reading some of these books and articles really does count as work. Generally speaking, our current interests revolve around emergent technology and security- especially technology futures, responsible innovation and disarmament. Much of the stuff we end up reading also stems from suggestions we get from other people we bump into in the department as well as from other faculty who recommend all sorts of weird and wonderful things- oh yes, and inevitably from Twitter.

You can find the previous post in this series here

“Everywhere we turn, a startling new device promises to transfigure our lives. But at what cost? In this urgent and revelatory excavation of our Information Age, leading technology thinker Adam Greenfield forces us to reconsider our relationship with the networked objects, services and spaces that define us. It is time to re-evaluate the Silicon Valley consensus determining the future”

This really is a fascinating book. It’s especially strong on the phenomenology of technologies, and the ways in which we invite them to colonise ever more aspects of our human existence. The concluding chapter, On Tetrapods and Tactics, represents an excellent reflection on the ways in which technologies embody ideas and often take on a life of their own. -TH

From the Closed World to the Infinite Universe
Alexandre Koyre 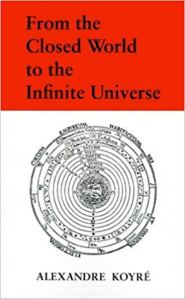 During the sixteenth and seventeenth centuries a radical change occurred in the patterns and the framework of European thought. In the wake of discoveries through the telescope and Copernican theory, the notion of an ordered cosmos of “fixed stars” gave way to that of a universe infinite in both time and space—with significant and far-reaching consequences for human thought. Alexandre Koyré interprets this revolution in terms of the change that occurred in our conception of the universe and our place in it and shows the primacy of this change in the development of the modern world.

I think this is particularly useful as an early history of western societies relocating themselves as controlling actors in the natural world, rather than observers of it. The predominance of physics and the despair of adapting to a universe of unimaginable scale are useful reflections here. -TH

The Imagineers of War
Sharon Weinberger

Founded in 1958 in response to the launch of Sputnik, the agency’s original mission was to create “the unimagined weapons of the future.” Over the decades, DARPA has been responsible for countless inventions and technologies that extend well beyond military technology.

Sharon Weinberger gives us a riveting account of DARPA’s successes and failures, its remarkable innovations, and its wild-eyed schemes. We see how the threat of nuclear Armageddon sparked investment in computer networking, leading to the Internet, as well as to a proposal to power a missile-destroying particle beam by draining the Great Lakes..

The Imagineers of War is a compelling history in which science, technology, and politics collide. -TH