Last week a meeting held at the University of Bath brought together practitioners and experts in order to discuss the implications of innovation in biology and chemistry for security in a UK context. In recent years, security concerns related to this issue area have received intermittent public attention. This has been primarily in the wake of the US Anthrax attacks in 2001, as well as in relation to chemical weapon atrocities in Syria. There has also been recent press coverage, as well as high-level emergency reviews, related to security concerns about research into avian influenza which demonstrated how to make the virus more transmissible. The avian influenza discussions, follow over a dozen other reviews of comparable cases in the previous decade, in  a range of institutions internationally. 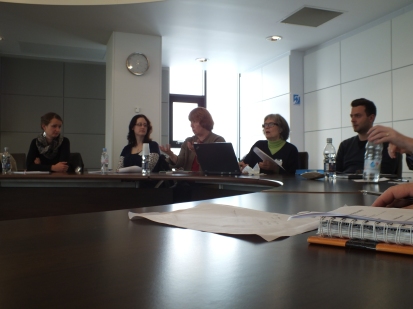 Discussion During the Round-table Session. Photo by R.Guthrie

At the event, there was emphasis on the need to ensure that civilian technologies, materials and expertise related to innovation did not contribute to the prospect of bio-chemical terrorism or warfare. Often such discussions focus on lock and key containment type strategies. However, the emphasis within this project is to think about how novel approaches can be developed which allow for a broader range of misuse scenarios, and S&T trends of potential concern to be addressed in a pre-emptive and responsible way. For example, this includes considering how existing local-level ethics review and safety practices could potentially be developed to more explicitly and comprehensively address security concerns.

One practical aim of the meeting was to discuss the potential value of regional networks in biochemical security, with an emphasis on the role of local research institutions as well other stake-holders at a local and national level. The meeting was led by Professor David Galbreath and Brett Edwards, both from the department of Politics, Languages and International Studies. In attendance were local laboratory biosafety and ethics experts, academics and policy experts, as well as representatives from several government organisations.

The meeting was designed to encourage frank discussion between practitioners and policy shapers. On the day, the meeting involved opening presentations by key institutions. This included a presentation from Cathy Day, Head of Health, Safety and Environment at the University of Bath. The round-table session in the was chaired by Dr James Revill, University of Sussex. Dr Revill stated that:

A report of the meeting is under production, however some key provisional findings are:

After the meeting, Professor Galbreath Stated that:

‘The ethical and risk management of chemistry and biology occurs at many levels from the United Nations to individual scientists in the lab. The meeting was a great opportunity to bring these different levels together to talk about the challenges to these scientific advances and how they pose a problem for security and public health. I am exceptionally pleased with the understanding and co-operative spirit of the participants and look forward to further cooperation with our partners at the ESRC and DSTL as well as through a South West Bio-chemical Security Initiative.’

Further information on the project, as well as a policy paper series are available at the project website (www.biochemsec2030.org). The policy paper series addresses policy challenges at the interphase of innovation and security policy in the context of biological and chemical weapons regimes. Recent publications have focused on the challenges posed by state level investment in to incapacitating chemical weapons, current science and technology review processes at international level, as well as the potential challenges posed by amateur biologists.

The Biochemical Security 2030 Project is funded by the ESRC and DSTL under the RCUK Global Uncertainties initiative as part of the Science and Security Programme. The original project was designed and submitted by Dr Alexander Kelle (University of Bath) whom is currently seconded to the Organisation for the Prohibition of Chemical Weapons. The principle Investigator on the project is Professor David Galbreath, supported by the work of Brett Edwards.

Drop us a line.... Cancel reply